Jesus replied, “The hour has come for the Son of Man to be glorified.  Very truly I tell you, unless a kernel of wheat falls to the ground and dies, it remains only a single seed. But if it dies, it produces many seeds.  (Jn 12:23–24; NIV)

Some years ago, I was told a story about some teens who had busted a pumpkin on a person's sidewalk.  The next day before the homeowner could clean up the mess it snowed.  Of course, everything got shoveled off the sidewalk on to the ground.  In the spring the owner had forgotten about the pumpkins and decided to do some yard-work, turning under his yard and reseeding it.  When he got done with his yard-work, he had some dirt leftover, and so his neighbors wanted some.  It is now September, and the whole block looks like a pumpkin patch.  We tend to think of seeds as being dead, but really they give more life.  One seed produces a plant that has two seeds; those two turn into four, four to eight, and so on.

Jesus was one seed that everyone thought was dead, but when he rose again on the third day, he produced many seeds, and they have been producing ever since.  Today his garden is enormous!!  From one seed, Jesus the Christ, has come a garden of Christians that only through the grace of God keep producing seeds.  And it is through the work of the Holy Spirit that those seeds will continue to grow and produce more seeds until he gathers us all home. 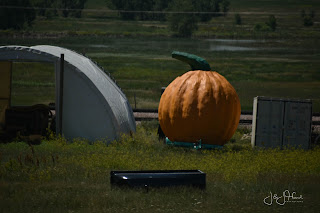