Good In All Things

Then Pharaoh said to Joseph, “Since God has made all this known to you, there is no one so discerning and wise as you.  You shall be in charge of my palace, and all my people are to submit to your orders. Only with respect to the throne will I be greater than you.”  (Ge 41:39–40; NIV)

Isn't it amazing how God can turn things around for good?  In the story of Joseph, we find that his brothers were so jealous of him that they sold him into slavery.  He was resold and bought by Potiphar, a high ranking official in Pharaoh's rule.  Potiphar put Joseph in charge of all he had, but Potiphar's wife had other ideas, and when Joseph refused to sleep with her, she had him brought up on false charges, and Joseph was placed in prison.  For two-plus years Joseph was in the house of the captain of the guard.  Then Pharaoh had a dream no one could interpret.  That's when a former cellmate of Joseph's who was now again the chief cupbearer for Pharaoh remembered that Joseph had interpreted his and the chief baker's dreams.  So the chief cupbearer told Pharaoh about Joseph's gift.

Of course, the story doesn't end there, it gets even better.  What I failed to tell you is Joseph believed in God, and through all his hard times, he continued to believe and have faith that God would see him through.  Many people that if they run into hard times, God is not with them, but just look at the story of Joseph or even Paul if you want something from the New Testament.  God used Joseph and never left him, and it was because of God that Joseph was able to interpret Pharaoh's dreams, and Joseph let him know it.  Because Joseph interpreted Pharaoh's dream, he was placed in charge of all of Egypt, only Pharaoh was greater than Joseph.

Sometimes we forget God can use any situation for his good, and instead of letting him, we start making decisions for ourselves.  When these decisions go wrong, we tend to blame God instead of ourselves.  Let's start looking at how God used all the "so-called" bad situations in the Bible for his good and how he is still using what we think are bad situations for his glory.  So the next time you run into some trouble start looking for the silver lining that only he can make. 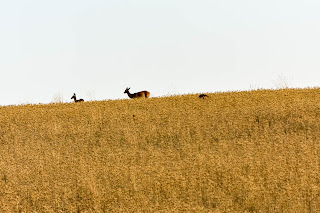