On the day the LORD gave the Amorites over to Israel, Joshua said to the LORD in the presence of Israel: “Sun, stand still over Gibeon, and you, moon, over the Valley of Aijalon.”  So the sun stood still, and the moon stopped, till the nation avenged itself on its enemies, as it is written in the Book of Jashar.  The sun stopped in the middle of the sky and delayed going down about a full day.  There has never been a day like it before or since, a day when the LORD listened to a human being. Surely the LORD was fighting for Israel!  Then Joshua returned with all Israel to the camp at Gilgal.  (Jos 10:12–15; NIV)

When Robert Louis Stevenson was a boy, he once remarked to his mother, "Momma, you can't be good without praying."  "How do you know Robert?" she asked.  "Because I've tried!" he answered.  This reminds me of another young boy, one who had been sent to his room because he had been bad.  A short time later, he came out and said to his mother, "I've been thinking about what I did, and I said a prayer."  "That's fine," she said, "if you ask God to make you good, he will help you."  "Oh, I didn't ask him to help me be good, " replied the boy.  "I asked him to help you put up with me."  (Our Daily Bread)

Prayers are so misunderstood.  Many people will only say a prayer if they are in trouble, thinking they just don't have the time to say one unless the situation calls for one.  But the truth is any time is a good time for prayer.  Here are a few times that I have personally used: driving to/from work, waiting at stoplights (what else do you have to do?).  We don't have to pray that the sun would stand still, though there are days when I could use a few more hours.  On those days what I have found is when I pray I don't feel as rushed, I do only the things God wants me to do, and the rest will be waiting for another day.

God said, "Be still and know that I am God."  That's good advice.  Slow down and take time to pray.  Remember who it is we are praying to and how he answers prayer.  If nothing else, pray like the little boy, that God will help others put up with you. 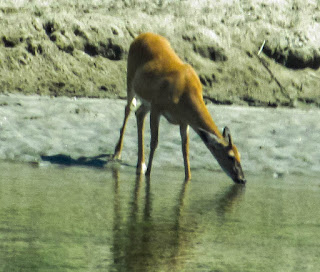