When once the owner of the house has got up and shut the door, and you begin to stand outside and to knock at the door, saying, ‘Lord, open to us,’ then in reply he will say to you, ‘I do not know where you come from.’  Then you will begin to say, ‘We ate and drank with you, and you taught in our streets.’  But he will say, ‘I do not know where you come from; go away from me, all you evildoers!’  There will be weeping and gnashing of teeth when you see Abraham and Isaac and Jacob and all the prophets in the kingdom of God, and you yourselves thrown out.  Then people will come from east and west, from north and south, and will eat in the kingdom of God.  (Lk 13:25–29; NRSV)

When I was in the military, we would have war games that were to prepare us for the "real thing."  During these games, when we were under attack, we would close ourselves off in a bunker or building and lock the doors.  None of our people were to be outside during that time. So if anyone came to the door, it was thought to be the "enemy."  Sometimes I was the person on the outside trying to get in.  It seemed as though the door closed to fast, and I was not ready for it.  I could stand on the outside and plead for all I was worth, but the door would not open.  I could see my friends in the building, safe and sound, kicking back and not worrying about anything.  While they were safe and secure, I was on the outside, just waiting for a "judge" to come by and declare me dead.

It sounds a lot like what Jesus was talking about, except in my case, it was only an exercise.  We just don't know how fast that door will close, and if we are just taking our time getting there, we may find ourselves on the outside looking in.  And even though we can see our friends and loved ones from every corner of the earth on the inside, we will not be allowed to enter.  The King of kings has shut the door, and we pound on it he will say, "Go away, I don't know you or where you come from."

Praise God, I know which side of the door I'm going to be on, and I want to take as many as I can with me to the feast being celebrated in the kingdom of God.  Can you think of someone you would like to go to the banquet with? 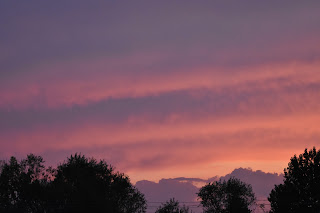