For he has rescued us from the dominion of darkness and brought us into the kingdom of the Son he loves, in whom we have redemption, the forgiveness of sins.  (Col 1:13–14; NIV)

Have you ever been in a situation where you needed to be rescued?  I'm sure I've been saved many times, but only one of those times comes to mind this morning.  An uncle (only two years older than me) and I were out cutting down some trees.  We were relatively young at the time, so this was not a bright idea, as a matter of fact, I don't remember "bright" being used for many of our plans.  I was on a hillside where the tree was going to fall, and as I went to move out of the way, I slipped.  As I was getting back on my feet, the tree came crashing down, and the outcome could have been way different.  Did I mention this was not a bright idea?  So here I was, pinned between two trees, and with all the strength, my little body could muster, I could not move the tree.  It took both of us pushing to get it off of me.  As you can tell, I was rescued from my predicament and overjoyed about it.

God does the same type of rescuing.  He finds people that are pinned down by the dominion of darkness and cannot move, and he lifts all their burdens off of them so they can breathe.  He brings us from that darkness and delivers us into his light.  From a dungeon to a kingdom.  And just how did he do this?  Well, he sent his son to be "pinned to the tree" for each and every one of us.  It is through his son that we have found redemption, the forgiveness of sins.

It's great to know we have our own personal Rescuer! 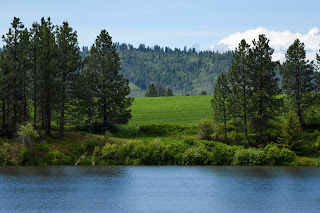