The herdsmen ran away and went to the town and to the countryside, telling everyone about this. So people went out to see what had happened.  They came to Jesus and saw the man who used to have the many evil spirits, sitting, clothed, and in his right mind. And they were frightened.  The people who saw this told the others what had happened to the man who had the demons living in him, and they told about the pigs.  Then the people began to beg Jesus to leave their area.  (Mk 5:14–17; NCV)

Picture with me this situation, Jesus had just crossed the lake to the region of the Gerasenes where he was met by a man who was possessed by a legion of (1,000 to 1,500) demons.  This man was so possessed that the townspeople could not even keep him confined with ropes or chains. The entire town was afraid of him.  But at the sight of Jesus, the man comes and kneels down in front of him.  The demons ask Jesus not to harm them but instead cast them into a nearby herd of pigs, which he does.  The man is no longer possessed, he is thinking straight, acting normal, he has returned to his old self.  What happens next is beyond my understanding, "the people began to beg Jesus to . . . . . . . leave their area.  Leave their area?  I would be begging him to stay!

Instead of celebrating and rejoicing about what had happened to the man, they were more concerned about what happened to the herd of pigs!  Are we like the Gerasenes and care more about ourselves than about the lives and souls of those around us?  When we see someone's life change and they start working for the Lord, do we panic and fear how their new conversion will affect our relationship with the others or do we move over and let them help us build the Kingdom of God?

Have you been accepting new Christians with open arms or have you been sending Jesus away because of all the great things he is doing in their lives?  Sure sounds like a silly question.  That's because it is.  He changed our lives for the better, let's watch him change the lives of others. 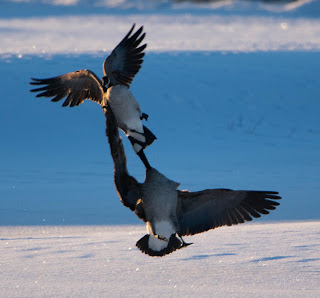